I went to a coding bootcamp two years ago, so I’m frequently approached by friends and friends-of-friends who are thinking of doing the same.

Some people who approach me are not sure whether a bootcamp will be high-quality or worth the cost, and wonder whether they’d be better off learning on their own. Here’s how I think about the tradeoff between bootcamps and self-study:

For me, my main goal was to get a job in tech. After researching bootcamps, I was very confident that if I went to a good bootcamp, I’d come out with a six figure job (in San Francisco). Boot camp was going to cost me $15k, which meant that if bootcamp enabled me to get a job two and a half months earlier than I would otherwise, it’d be worth the cost.

Another way a bootcamp would be worth the cost is if a bootcamp could help me get a job that paid $15k more than if I had tried to self-study. Many bootcamps help you negotiate offers, so this seemed plausible.

After talking to former bootcamp grads, I was confident that bootcamp could help me get a job sooner that paid more.

The accountability alone seemed like it would speed up my development. I chose a bootcamp that met six days a week, including Saturday. The bootcamp ran from 9 am to 8 pm every day, except Saturdays when we got off “early” at 5:30 pm. You were allowed 3 excused absences in the three month program. Otherwise, you were kicked out of the program. Tardiness also counted towards your absences — if I recall correctly, three tardies was considered one absence. So if you were late — even by a minute — nine times, you were removed from the program.

I’m a disciplined person, but I doubt I could have matched my bootcamp’s intensity on my own. You lived and breathed programming for three months, rain or shine, in sickness or in health. Oh right, sickness — the three excused absences included sick days, which meant that you were expected to show up even when you were sick. My bootcamp provided masks and hand sanitizer before they were cool (this was pre-covid). Sick students sat far away from other students, and rather than pairing with another student (which we did most days), they worked on their projects alone.

I think the reason many people are skeptical of learning to program within a bootcamp is that they have been burned by educational institutions before. Colleges, in particular, don’t seem to teach hands-on programming skills, focusing more on theory that’s better for a career in academia than working as a software engineer. And people who have the confidence and agency to switch careers in the first place are often proficient at teaching themselves new skills. Why pay money when you can just learn on your own?

Because: a bootcamp’s incentives are extremely well-aligned. Bootcamps are judged based on how quickly their students get jobs, and how much those jobs pay. Reputable bootcamps have their outcomes data audited the Council on Integrity in Results Reporting (CIRR). Colleges almost never share these stats, and thus aren’t as strongly incentivized to produce good outcomes for their students.

At my bootcamp, a new cohort started every six weeks, and no two cohorts had the exact same curriculum. The content and methodology was consistently being experimented on. In addition to outcomes data, my bootcamp kept extensive quantitative and qualitative data on each student: how you were performing on the weekly tests, how quickly you were becoming independent (able to google your way out of bugs, not needing to rely on the resident tutors). They then use this individual data, along with the outcomes data, to determine if their most recent educational experiments were a success. So you are immersed in an environment that is hyper-optimized to make you the strongest engineer and job candidate possible in 3 months. (Honestly, in these terms bootcamp sounds a little dystopian…but it works).

Since a bootcamp’s ranking is determined by job placements, bootcamps actively help you job hunt — unlike most colleges that tend to host a few job fairs and call it a night.

Some ways my bootcamp helped me on the job hunt:

After considering the benefits, bootcamp seemed like the practical choice. But I also had an aesthetic choice to make. Did I want to spend three months attending a bootcamp? Would I have fun? Would I be miserable?

The alternative for me, self-studying, would have meant spending all day alone for months, while my friends were at their day jobs. Whereas spending so much time with classmates at bootcamp sounded a bit like summer camp. In the end, I loved attending a bootcamp. Sometimes the pace was stressful, but my classmates and I joked around with one another to lighten the mood, and had late night heart-to-hearts.

I also found that I learned a lot from classmates who were slightly ahead of me or had discovered new tools or tricks that I wasn’t aware of. Classmates filled in a lot of knowledge gaps that I would have missed if I were self-studying because you don’t know what you don’t know. After a decade of book-learning in school, I discovered that working with someone else is a surprisingly effective way to improve quickly.

Just kidding, it really is fun. Just maybe in a different way than you’re used to 😉

So, should you go to bootcamp?

I think the biggest consideration is how much bootcamp would cost you, and your expected job prospects. In my case, I moved to San Francisco to attend bootcamp, and planned to stay there afterwards. Based on the state of the job market in San Francisco at that time, I was highly confident that I would come out with a six figure job. That made it a relatively easy (although scary) financial decision for me.

I suspect that the job market for software engineers is strong in most major cities in the U.S., but you’d do well to look up statistics, and talk to recent bootcamp grads in your city. You also might want to choose a specialty based on which jobs have the highest demand. In my case I chose a Javascript bootcamp (in 2018). 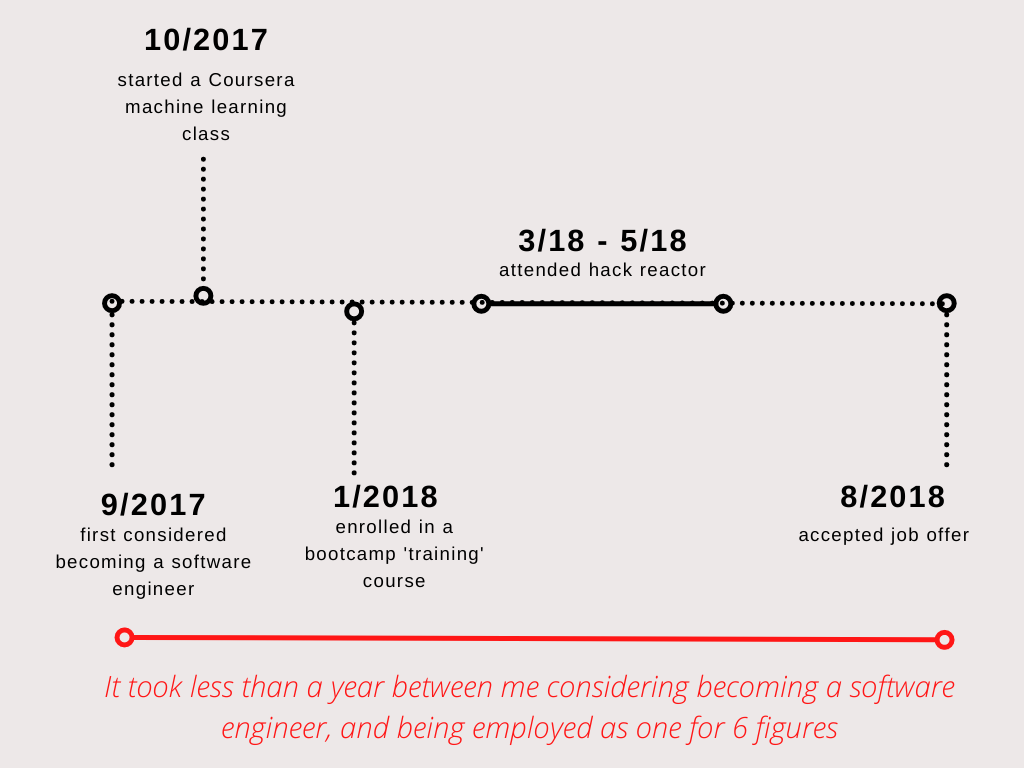 The turnaround of a bootcamp is absurd. I first considered becoming a software engineer in September 2017, while I was back home visiting my parents in the Bay Area. I was most interested in data science (since I had a background in market research), so I started taking an online machine learning course in October 2017. In January 2018, I decided I was more interested in building than analyzing, and I enrolled in an online course meant to prepare you for web development bootcamp interviews. I was accepted to a bootcamp that started on March 5th, and went until May 31st. I accepted an offer in August 2018. That means that in less than a year after thinking about becoming a software engineer, I was employed as one.

1. After discussing this post to friends, I realized that most people’s main concern about becoming a software engineer is: “Am I smart enough?”
I’ll address that in a future article, but the TL;DR is: yes, you’re smart enough, I’m sure of it :)

2. @tjrwriting brought up that not all bootcamps are created equal, especially since the industry is unregulated. If you are trying to find a high-quality bootcamp in your area, I’d recommend https://www.coursereport.com/.