December 11, 2019 link
I went whale watching recently and we came across a super pod of dolphins. We sped across the water in our speedboat to create a wave, and watched hundreds of dolphins rush to come play.
Our guide told us it was the biggest pod of dolphins he had witnessed in 20 years as a captain.
It got me thinking: how do the dolphins stay together as they move across the ocean? Who's in charge?
I'm fascinated by the collective intelligence of animals.
Sometimes I think about humanity the same way. Who's in charge of us? A president has a bit of power, sure. But the vast majority of our daily lives are out of the purview of anyone in particular. How did we build New York City or create modern English? Humans collectively create these things and only after the fact do we create official governing bodies to try to maintain some semblance of Order and Structure.
The negative personification of collective intelligence (or lack thereof) is "Moloch". I want a friendly, lovable positive personification of collective intelligence.
December 1, 2019 link
Thanksgiving exposes us to opinions that don't usually penetrate our carefully curated filter bubbles. Therefore, you can use Thanksgiving to uncover your sacred cows.
Did you find yourself in any conversations where you felt annoyed or flustered? That might be a sign that you're so emotionally attached to a belief that your emotions cloud your ability to think clearly.
This Thanksgiving I discovered 3 of my sacred cows, all a little too cliche for a Silicon Valley Techno-Futurist 🙄:
1. I'm irrationally pro-Amazon
2. I'm irrationally pro Uber and Lyft
3. I'm irrationally pro-housing and often over-simplify urban problems to YIMBY v. NIMBY.
What beliefs do you hold too tightly to?
July 8, 2019 link
I love slice-of-life documentaries that give you a peek into a different culture or sub-culture.
They help induce this-is-water moments. We are reminded that the cultural water we swim in isn’t natural or inevitable. We aren’t in the ocean; we’re in a Dasani bottle.
Two of my favorite short (and free!) documentaries are:
July 4, 2019 link
Looking for an entry point into Ribbonfarm?
Want more recs? Check out Aaron's Mediocre Ribbonfarm Starter Guide.
If these articles are way too long and meandering for you, just follow @vgr on twitter. He’ll still manage to inception his worldview into yours.
June 25, 2019 link
Thinking on Sarah Perry’s idea that when we see a drop in complexity, we are seeing the results of intelligence. For example, a trail is order imposed on the chaos of nature; a human has been there.

Perhaps we could measure intelligence by comparing the chaos of reality to the simplicity a human imposes on that chaos. The greater the git diff, the higher the intelligence.
I’m reminded of Steve Jobs returning to Apple and cutting its product line to 4 products.
Apple had a dozen versions of the Macintosh, each with a different confusing number, ranging from 1400 to 9600. "I had people explaining this to me for three weeks," Jobs said. "I couldn’t figure it out." He finally began asking simple questions, like, "Which ones do I tell my friends to buy?"
"Here’s what we need," he continued. Atop the two columns he wrote "Consumer" and "Pro"; he labeled the two rows "Desktop" and "Portable." Their job, he said, was to make four great products, one for each quadrant.
- Steve Jobs by Walter Isaacson
We still feel the effect of Jobs' intelligent simplifying (and his leadership to make it happen) when it’s easy to choose an iPhone or MacBook, and everything *just works*
June 15, 2019 link
A friend from college is about to start police academy. She described the role of police as dealing with society’s newest problems…issues that are so new that policy has not had the time to address them. Police are society’s first responders.
Currently, the issues that policy hasn’t caught up to are the homeless crisis and the opioid epidemic.
June 15, 2019 link
Why do we still sign receipts? Does anyone ever check those signatures?
The reason credit card companies still insist on requiring signatures as a default is to up-sell establishments for the privilege of not using signatures.
Some restaurants, like Chipotle, are willing to pay more per transaction to skip the signatures, so that their lines move faster.
H/t @ctbeiser
June 15, 2019 link
Conspiracy theorists appeal to quantity to give authority to their claims. E.g. "I have a 4 hour video on this", or "I have 700 pages on this". (H/t @davesneider)
Twitter is the opposite. The character limit forces you to eliminate filler and fluff, and puts the spotlight on the idea you are presenting.
June 13, 2019 link
I think of Twitter as a giant brain, where each tweet is a node, and can be connected to dozens of other tweet-nodes, which continue branching off. As @jack once said, "It’s so close to thinking. That to me is the most beautiful thing about Twitter".
For awhile I wanted Twitter to add a visual view. In the meantime, I tried the Treeverse chrome extension (h/t @Malcolm_Ocean) and creating my own tweet mind-map.
But it’s very hard to model a brain-like system in 2D on a laptop screen, and especially on a mobile screen.
I’m excited for how we will interact with a platform like Twitter in 3D, with the advent of VR and AR.
May 27, 2019 link
I had dinner with a friend who is interested in becoming active on Twitter. (Yay! I’m always trying to get my friends to use Twitter).
I gave him advice about how to start posting that might be helpful for others:

“Never attribute to stupidity or malice that which can be adequately explained by structural alignment of incentives.”

-Hanlon's Razor as revised via @kevinakwok 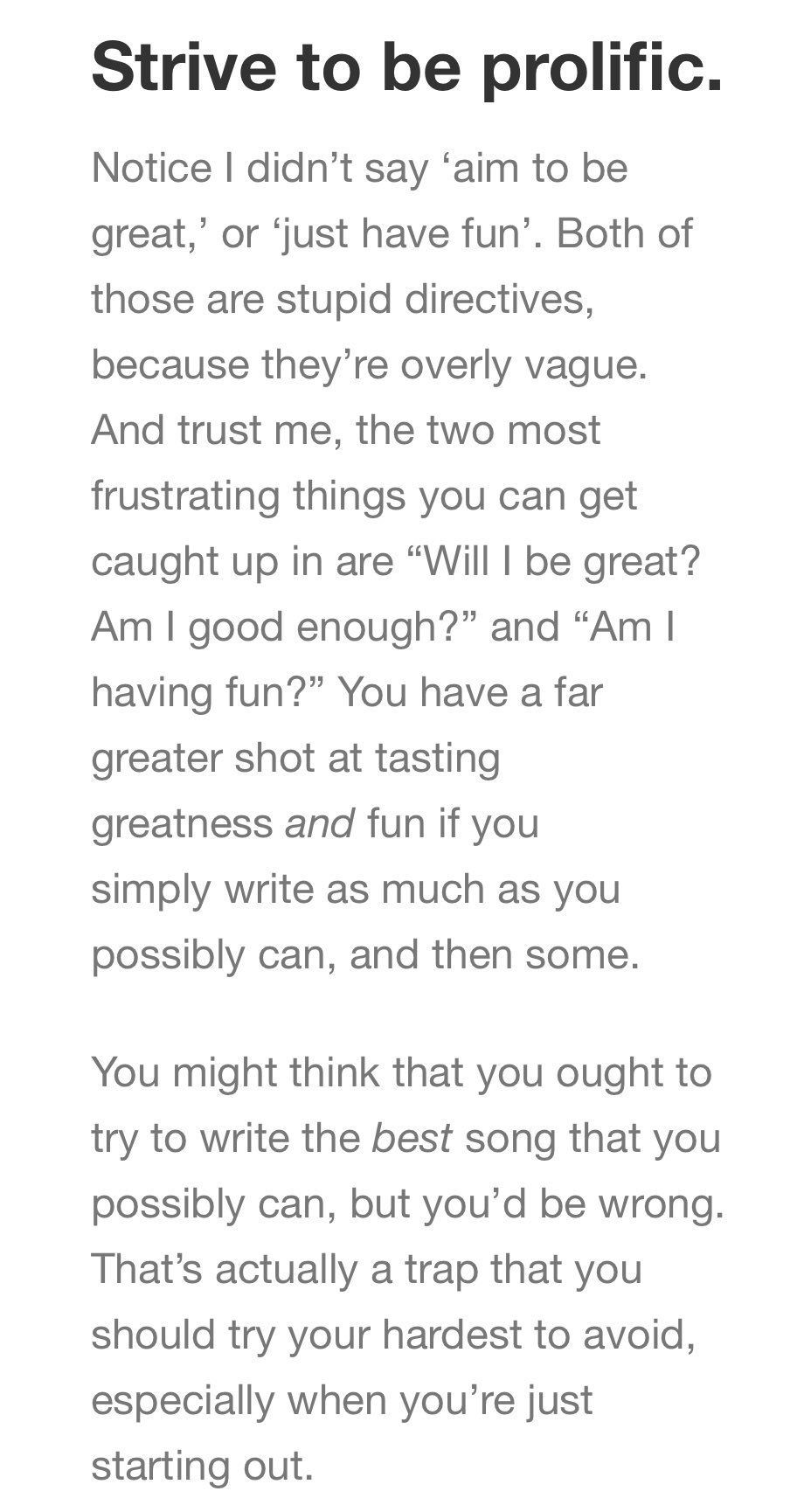 Source: @visakanv
February 3rd, 2019 link
Good tools hide complexity until the complexity is necessary to the user’s needs. I call it "just-in-time exposure" (a corollary to "just-in-time learning").
Google Maps is an example of hiding complexity. If you want to get directions, you can input a destination location. Most users stop there, and the view isn’t cluttered by other features. But if you dig deeper into Google Maps you can explore street view, look at restaurants and cafes, see historical landmarks, etc.
Another way to hide complexity is by setting defaults. The average user is a satisficer when it comes to your tool; They just want it to work. 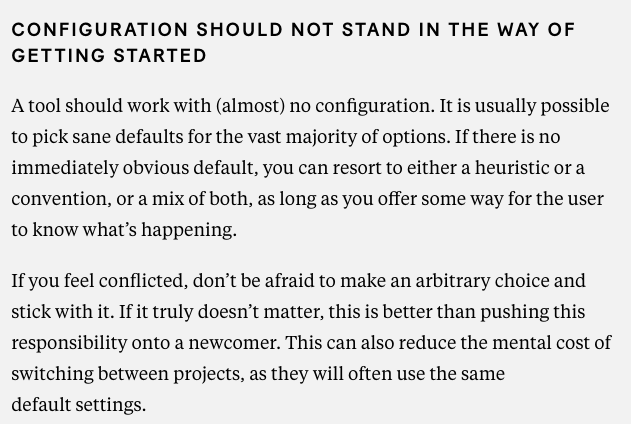 Source: Increment Magazine
January 3rd, 2019 link
Short PRs are better. My coworkers throw several tickets into a single PR. But the shorter the PR, the easier it is for the code reviewer to follow the logic, and thus notice flaws.
Also, when reviewing a long PR we tend to get fatigued and are more likely to just gloss over the changes.